Walmart Offers New Vision for the Company’s Role in Society

Walmart Offers New Vision for the Company’s Role in Society 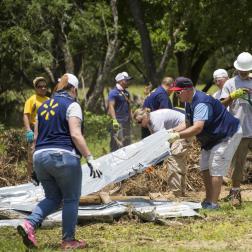 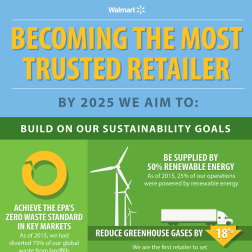 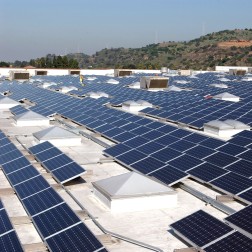 Philadelphia, Pa. – November 4, 2016 – At today’s Net Impact Conference, Walmart president and CEO Doug McMillon will outline a roadmap that will guide the company’s role in society on critical issues over the next several years, pointing to a “new era of trust and transparency.” The roadmap adds fresh detail to Walmart’s sustainability agenda and contains new commitments that reflect a wider recognition of the company’s impact on communities and the planet.

Among other things, Walmart is doubling sales of locally grown produce in the U.S.; expanding and enhancing sustainable sourcing to cover 20 key commodities, including bananas, coffee and tea; and implementing a new plan designed to achieve science-based targets for reducing greenhouse gas emissions.

Walmart is the first retailer with an emissions-reduction plan approved by the Science Based Targets Initiative, in alignment with the Paris Climate Agreement in December 2015. Under the approved plan, Walmart will use a combination of energy-efficiency measures, together with a commitment to source half of the company’s energy needs from renewable sources, to achieve an 18 percent emissions reduction in its own operations by 2025. Additionally, Walmart will work with suppliers to reduce emissions by 1 Gigaton by 2030, equivalent to taking more than 211 million passenger vehicles off of U.S. roads and highways for a year.

In his remarks, McMillon will also discuss company programs that will train hundreds of thousands of U.S. associates by the end of next year, providing them with skills needed to move from entry-level positions to jobs with more responsibility and higher pay, along with a new pledge to take a leadership role in promoting ethical recruitment and treatment of workers in the global retail supply chain.

Taken together, the initiatives are designed to make good on the company’s desire to become the most trusted retailer, not just by delivering affordable goods and a time-saving shopping experience, but with trust-building transparency and actions.

“We want to make sure Walmart is a company that our associates and customers are proud of – and that we are always doing right by them and by the communities they live in,” McMillon said. “That’s really what these commitments are about. And that’s why we’re so passionate about them.”

The roadmap builds upon the three environmental sustainability goals Walmart set in 2005: to create zero waste in company operations, to operate with 100 percent renewable energy, and to sell products that sustain natural resources and the environment. Those aspirational goals have guided how Walmart engages on those vital issues and progress has been made toward them. The new roadmap builds on progress to date, but also broadens the company’s vision of its role in society.

The commitments shared today include:

McMillon also discussed the company’s $2.7 billion investment over the past two years in education, wages and training for associates in the U.S. and called for a broader industry push to ensure retailers are seen as employers of choice. “Today we are asking other retailers to join us in helping people live better,” he said. “Let’s use our collective power to create good jobs with good training that become good careers for all our associates.”

Walmart will work to achieve the following:

About Walmart
Walmart Stores, Inc. (NYSE: WMT) helps people around the world save money and live better – anytime and anywhere – in retail stores, online, and through their mobile devices. Each week, nearly 260 million customers and members visit our 11,539 stores under 63 banners in 28 countries and e-commerce websites in 11 countries. With fiscal year 2016 revenue of $482 billion, Walmart employs more than 2.3 million associates worldwide. Walmart continues to be a leader in sustainability, corporate philanthropy and employment opportunity. Additional information about Walmart can be found by visiting http://corporate.walmart.com on Facebook at http://facebook.com/walmart and on Twitter at http://twitter.com/walmart. Online merchandise sales are available at http://www.walmart.com and http://www.samsclub.com.