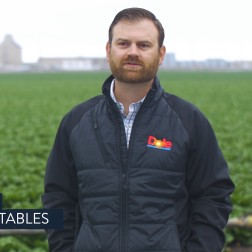 Farming the Future: Harvesting Data on Blockchain
Zach Barnes, a farmer for Dole, explains how information on blockchain can help trace food from your table back to his farm.
View Video 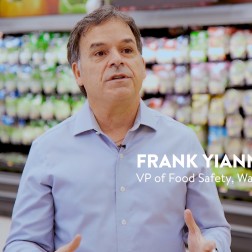 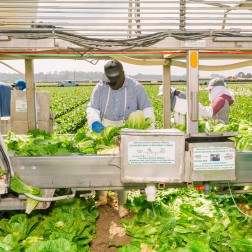 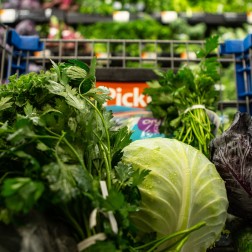 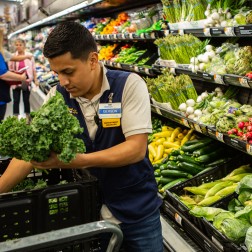 How do you know your food is safe to eat?

This isn’t a question many of us often ask ourselves. But lately, food safety has been in the public eye: 2018 has already seen a large outbreak of E. coli in romaine lettuce and Salmonella in a number of products from eggs to breakfast cereal.

Walmart Asks Suppliers of Leafy Greens to Use Blockchain

Today, Walmart and Sam’s Club sent a letter to suppliers of fresh, leafy greens asking them to trace their products all the way back to the farm using blockchain technology. Suppliers are expected to have all these systems in place by this time next year.

This change means that the information gathered by these suppliers will be open and accessible through technology that offers real-time, end-to-end traceability from farm to table. Blockchain allows for digitized sharing of data in a secure and trusted way.

What happens when the food you buy has been identified as having Salmonella or E. coli? You may not know where or how your Caesar salad was affected. You just know you don’t want your family to get sick when eating it.

This year, many customers and grocers were forced to throw away large amounts of romaine lettuce when an E. coli contamination in romaine lettuce spread through the food industry. Health officials at the Centers for Disease Control told Americans to avoid eating lettuce that was grown in Yuma, Arizona.

“But it was difficult for consumers to know how to determine where their lettuce was grown,” explained Frank Yiannas, VP of Food Safety at Walmart.

“None of the bags of salad had ‘Yuma, Arizona’ on them,” he said. “In the future, using the technology we’re requiring, a customer could potentially scan a bag of salad and know with certainty where it came from.”

It’s crucial to respond quickly and accurately to food safety issues like these. But with the traditional paper-based method of capturing information that exists at many farms, packing houses and warehouses, tracking down important data from multiple sources is extremely time-consuming.

With paper-based ledgers, Yiannas mentioned that it may take his team seven days to track down where a product came from. The team has to contact the supplier, get paper records and use those records to contact the company that imported or shipped the product to Walmart’s distribution center.

Seven days may seem like a long time, but take into consideration the path a head of romaine lettuce takes to get to your salad bowl:

Multiply this process by the 70,000 food items stocked in a typical grocery store, and you have an almost insurmountable challenge.

“The food system is absolutely too large for any single entity to [track],” Yiannas said.

But blockchain changes everything.

“We’ve been working with IBM to digitize that, so the information is captured on the farm with a handheld system. It’s [also] captured at the packing house at the supplier,” Yiannas continued.

Now, Walmart plans to use the power of blockchain to speed up identifying, researching and reacting to food safety situations. Today’s news is the first step of bringing the benefits of open and transparent information to the food industry.

What is Blockchain, and Why is it Important?

Blockchain is a system of recordkeeping that is open to users. When a piece of permissioned information (or “block”) gets entered into the chain, other computers in the network are notified. This makes falsifying information very difficult, because the change of information is open for all to see.

The tie is the block. The rail is the chain. That’s the basic concept of blockchain.

Now, imagine trying to remove and alter one of those railroad ties. It’s not that simple. The tie can’t be altered without stopping trains, removing the rails, getting agreement from the civil engineer, and so on. Plus, everyone can see that you’re altering the railway, so you better make sure you get it right. There is a lot of accountability.

That’s what it is like to attempt to alter information in the blockchain. The information is out in the open creating greater transparency to changes. With increased accessibility comes more accuracy and trust.

This accuracy and trust is extremely important when both public health and livelihoods are on the line. Instead of taking a week to hunt down information about potential Salmonella in a product, blockchain tracking takes only a couple of seconds.

This gives food safety teams and customers alike the ability to react quickly.

In fact, the Centers for Disease Control believes that this change will help make more effective recalls.

Enhanced ability to trace a contaminated food back to its source will help government agencies and companies to identify the source of a foodborne disease outbreak, coordinate more effective recalls of foods thought to be contaminated, and learn where past problems began. We think these steps will strengthen future prevention efforts and better protect the public’s health from the threat of foodborne illness.

Walmart’s new requirement is about making food safer throughout the supply chain.

“Customers trust us to help them put quality food on their tables for themselves and their families,” said Charles Redfield, executive vice president of food for Walmart U.S. “We have to go further than offering great food at an everyday low price. Our customers need to know they can trust us to help ensure that food is safe. These new requirements will help us do just that.”

Making information available in the interest of public safety is a step change for the industry. But it matters to everyone.

“When it comes to safety, this is not a competitive issue,” Yiannas said. “We all win or lose together.”

Innovation
Walmart Now Piloting Drone Delivery of COVID-19 At-Home Self-Collection Kits
Since the beginning of the pandemic, Walmart has remained focused on serving our communities, be it through innovating around contactless ways to shop or through our COVID-19 testing. The health and safety of our associates and customers has been our top priority, and…

Innovation
Walmart Now Piloting On-Demand Drone Delivery with Flytrex
Years ago, our founder Sam Walton famously said, “I have always been driven to buck the system, to innovate, to take things beyond where they've been.” It remains a guiding principle at Walmart to this day. From being an early pioneer of universal bar codes and electronic…

Innovation
New Checkout Experience Seeks to Eliminate the Wait and Add Options at the Register
Retail checkouts have been evolving for years. Inside its stores, Walmart has introduced convenient check out options for years, including self-checkouts, pickup and delivery, giving customers more choice and changing the way they shop. But there’s one checkout area that hasn’t changed in a…