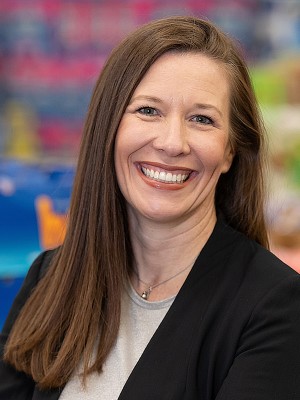 Kathryn McLay is president and CEO of Sam’s Club, a members-only warehouse club. A division of Walmart Inc., Sam’s Club had revenues of $64 billion for fiscal year 2020, 100,000 associates and nearly 600 clubs.

Kathryn has held a number of leadership roles at Walmart since joining in 2015 as vice president of U.S. Finance & Strategy. Her first role was driving the transformation of the Walmart U.S. business through oversight of a set of strategic, cross-functional initiatives called Legacy. In 2016, she moved to Supply Chain, where she redesigned the way product moved from supplier to shelf, created an integrated end-to-end Walmart U.S. supply chain and also led operations of the imports and reverse networks. In 2018, she was named executive vice president of Neighborhood Markets for the Walmart U.S. business, where she led the overall operations of nearly 700 of the small-format stores across the country.

Kathryn began her career in 1992 at Deloitte as an undergraduate and worked in both internal and external audit and later at Qantas Airlines. In 2001, Kathryn joined Australian retailer Woolworths in corporate audit and completed her professional studies as a Certified Internal Auditor. Kathryn was then appointed head of audit reporting to the CEO and the audit committee chair. In 2007, she was selected as the general manager for business development and subsequently held executive leadership roles throughout Woolworths’ retail and supply chain.

She is past president and chairwoman of the Institute of Internal Auditors and also served as a board member of ECRA, an industry board comprised of retailers and suppliers.

A native of Australia, Kathryn has a bachelor’s degree in accounting and finance from the University of Technology in Sydney.

Kathryn and her husband live in Bentonville, Arkansas, with their three children. She currently serves on the Northwest Arkansas Regional Board of Make-A-Wish Mid-South.