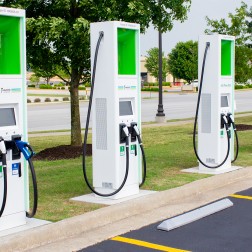 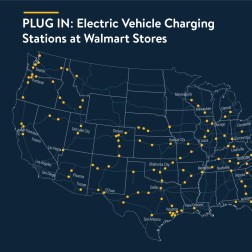 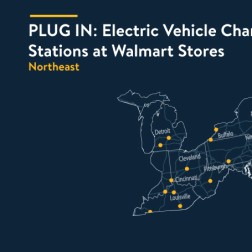 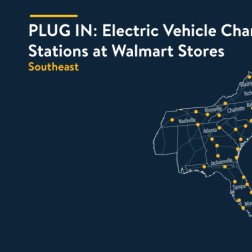 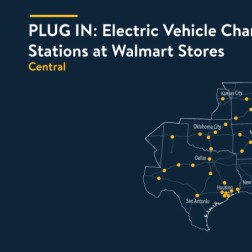 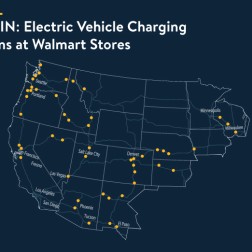 The companies have opened, on average, one new EV charging station every three days over the last 11 months

RESTON, Va. and BENTONVILLE, Ark., June 6, 2019 — Electrify America and Walmart announced today that more than 120 plus ultra-fast electric vehicle (EV) charging stations are now operational and open to the public at Walmart stores across the U.S. Building upon the original commitment set forth in April 2018, the companies are planning to expand the relationship in the coming years with additional Electrify America charging stations located at Walmart stores across the country.

Electrify America’s continued collaboration with Walmart is expected to make the retailer one of the largest retail hosts of electric vehicle charging stations across the United States, and reinforces Walmart’s broader mission to spark collective action – alongside key partners – to drive environmental sustainability and provide customers access to sustainable options.

The collaboration with Walmart is part of Electrify America’s strategy to help promote greater zero emission vehicle (ZEV) adoption by offering an ultra-fast and convenient charging network. The first 120 Walmart sites with Electrify America chargers are located across 34 U.S. states. Most of the new stations are strategically located at Walmart stores off major highways, with dozens more chargers planned for major metro areas.

Currently, a significant number of commercial EV charging stations in the U.S. are concentrated on the east and west coasts or in major urban areas. Through the Electrify America-Walmart collaboration, EV users will have increased access to services near highways, rural communities and driving routes in other sections of the country.

EV drivers can now travel across the country on major interstates and highways with a large concentration of EV chargers along U.S. interstates. EV charging station placement along many of these routes allow for EV drivers the option to solely recharge at Walmart stores during their travels. Examples of routes include Houston to Chicago via I-45, I-35 and I-44, San Antonio to St Louis via I-35 and I-44 and Washington DC to Savannah, GA via I-95.

“This milestone marks an important moment in the expansion of our charging station network,” said Brendan Jones, chief operating officer at Electrify America. “We look forward to continuing our work with Walmart to make electric vehicle charging faster and more convenient for consumers across the country, and in turn, encourage more adoption of zero emissions vehicles.”

Along with providing our customers with an enhanced shopping experience through added convenience, this initiative also allows us to contribute to the expansion and accessibility of our nation’s EV charging station infrastructure. Many of our Walmart associates and customers are EV drivers so providing access to these stations is the right thing to do for our customers, our business and the environment.

Additional Electrify America charging stations are expected to be installed at Walmart stores located in urban areas such as the District of Columbia and 46 states including California, the largest electric vehicle market in the U.S. Prior to its EV charging station expansion with Electrify America, Walmart was an early adopter of EV technology, providing EV chargers at approximately 100 store locations beginning with the first installations almost 10 years ago.

Electrify America chargers at Walmart stores feature 150 kilowatt (kW) and 350kW DC Fast Chargers. Chargers at this power can charge a vehicle at speeds of up to 20 miles of range per minute.

Electrify America, which is investing $2 billion over the next ten years in electric vehicle infrastructure and education, plans to deploy more than 2,000 chargers across 484 sites in 17 metropolitan areas and on highways. Stations will be located at convenient EV charging stops with access to retail, dining, parking and other facilities, with Walmart becoming a key partner to these objectives.

About Electrify America
Electrify America LLC, a wholly-owned subsidiary of Volkswagen Group of America headquartered in Reston, VA and with an office in Pasadena, CA, is investing $2 billion over 10 years in Zero Emission Vehicle (ZEV) infrastructure, education and access. The investment will enable millions of Americans to discover the benefits of electric driving and support the build-out of a nationwide network of workplace, community and highway chargers that are convenient and reliable. For more information, visit www.electrifyamerica.com.

Sustainability
Walmart Continues To Progress Beyond the Plastic Bag
Walmart continues to reinvent the retail experience as we move toward a more sustainable future. At the heart of these efforts is something that seems simple: the plastic bag. Our journey to go Beyond the Bag began early last year, when we joined Closed Loop Partners’…

Sustainability
Toward Regeneration, Together
One year ago, Walmart set a goal to become a regenerative company—one that places nature and humanity at the center of our business. The effects of climate change have grown even more urgent since we made that commitment. The communities we serve and our global neighbors alike have…