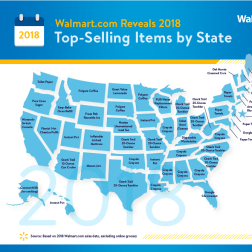 As 2018 comes to a close, Walmart.com is revealing the year’s top-selling items.

There were also some interesting regional differences. Some trends include:

eCommerce
Introducing Free Assembly: A Modern Fashion Brand for Women and Men, Found Only at Walmart
Walmart’s fashion portfolio has grown significantly over the past few years as we’ve focused on expanding our assortment. We’ve launched exclusive, elevated brands. We’ve added more than 1,000 apparel brands to our online assortment, and we have a new…

eCommerce
Get to Know Dwight Fenton, Our Brand Builder in the Making
Today, we’re thrilled to announce that Walmart is launching Free Assembly, a modern fashion brand that offers elevated style essentials for both men and women at an incredible value. The new brand will be available starting today on Walmart.com and in select…