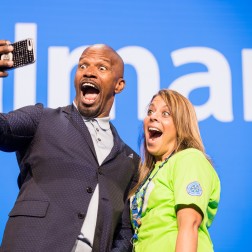 Well, on May 6, 1954, a British medical student named Roger Bannister did something most everyone thought was impossible. He ran a mile in less than four minutes. Has anyone here run a 4 minute mile? Anyone hate running?

No one had ever been able to run a four minute mile, and many, including doctors thought it might be impossible. Most thought the only way it could be done was if all these conditions existed:

Roger Bannister wasn’t even going to run that day. He had been working at the hospital all day and the weather wasn’t great. But, his coach implored him to run as others were close to breaking the record. 30 minutes before the race, he decided he would give it a go. That was a great decision!

As he came to the finish line that day, he collapsed. As he came to, he heard the announcer say... "a new world record of …3 minutes…"

Of course, you don’t have to hear the rest of the number… The "impossible" had been done. So, conventional wisdom was wrong that day. Professionally-trained runner? No. Bannister trained much less than others he studied how to run differently. Short bursts of energy? No. He medically knew that a steady pace was the key. Perfect weather conditions? No. It was windy and wet. Large crowd No. It was fairly small.

The conditions weren't perfect and the "only" way to do it wasn't quite correct. It rarely is. Roger Bannister did things differently. And, that’s what we’re doing at Walmart. Retail is changing, and we’re leading in taking a different approach to serve our customers.

We're disrupting retail. We’re serving customers in new ways by bringing our stores, clubs and eCommerce business together in ways that no one else can! Our assets are unlike any in the world, which allows us to do things OUR way. And we’re delivering results!

Look at some of these numbers from our last fiscal year.

By the way, that’s nearly $60 billion over the past 2 years. In addition to everything we're doing inside the business, we're making sure we take care of our shareholders.

We've increased our dividend for the 45th consecutive year and returned over $14 billion to our shareholders. We have one of the highest credit ratings in the world... and our company is valued by the market at nearly $250 billion! Your company is one of the strongest and most successful companies in the world… period.

Recently I was reading an article about Walmart that said things like:

The article had a quote from the CEO saying ...

"We’re laying the pipes to be successful in the future. It's the tuition you pay ... to get the education you need ... to get where you want to be."

You might wonder why I said the CEO and not Doug McMillon. Well, that’s because the quote was from David Glass… and the article was from 1996. Mr. Glass is with us today.

The article went on to say things like: How will Walmart continue to grow? Its sales have doubled to nearly $100 billion! It's a risky bet getting into groceries.

But, you see, Walmart has always been the disruptor. We still are! We’ve done things differently. We still do! And, Mr. Glass, I’d say it was a pretty good idea to get into groceries!

So you remember that $100 billion company that might not grow?
Your company hit $500 billion in revenue this year.

Our financial strength and willingness to do things differently will help us… to continue to grow and to win. Mr. Sam taught us this from the beginning!

He said, "Fight conventional wisdom. Have the energy to develop ideas that the world suggests are either not sophisticated enough or are too far from the way everyone does it."

We have all the assets in the world to win. And we have that great energy to develop new ideas; we’re disrupting retail again. We’re making decisions to set this business up for success for decades to come. We’ve focused on providing returns to shareholders in the short term, but winning businesses focus on the long term too. We’re doing both.

Take our recent announcement to grow in India by acquiring Flipkart.
India is a market with 1.3 billion people and great growth potential.

Flipkart is an amazing, disruptive company with great leadership changing how people shop in India. Welcome to the team! We're excited about this new opportunity.

No other company has all of the assets we have to win, no one! And it's up to us to ensure this wonderful company thrives now and into the future.

So let's go win! Thank you for all you do for Walmart.