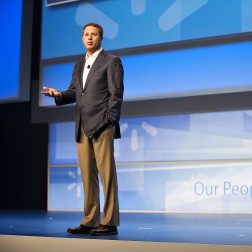 2017 Investment Community Meeting
Wal-Mart Stores, Inc. (NYSE: WMT) will webcast its 2017 Meeting for the Investment Community on Tuesday, Oct. 10 from approximately 8 a.m. to 12:15 p.m. CDT. A live video webcast of the presentations will be available here. In addition, and consistent with last year, the company will issue a pre-meeting press release at approximately 6:30 a.m. CDT on Oct. 10 which will include key messages and select guidance.
View Event

BENTONVILLE, Ark., Oct. 10, 2017 – Walmart will host its annual meeting for the investment community today where the company will discuss progress against its strategic initiatives to leverage its unique assets and win with customers and shareholders through innovation, greater convenience and speed. The company is also sharing select guidance information for the next fiscal year.

Walmart President and CEO Doug McMillon will provide an update on how the company is uniquely positioned to win.

“We have good momentum in the business, we’re executing our strategy and moving with speed to win with the customer, who is more connected than ever and embracing tools that will save them both time and money,” said McMillon. “We’re combining the accessibility of our stores with eCommerce to provide new and exciting ways for customers to shop. I’m proud of the team we have in place, the work we have underway and how we are positioned for success in the future."

McMillon will discuss accomplishments over the past year at Walmart U.S., including traffic and comp sales improvements, strong eCommerce growth and expanded online assortment, two-day free shipping with no membership fee and over 1,000 online grocery pickup locations. He will also highlight innovations around the world such as one-hour delivery from stores in China, commitments to sustainability, service to communities, especially in times of disaster, and investments in associates that are empowering them to drive results and better serve customers.

“We’re proud of the progress we’re making,” McMillon said. “We’re equipping our associates with training and technology so they will continue to innovate in our stores, clubs and through eCommerce to find ways to deliver an enjoyable shopping experience for our customers that is easy, fast, friendly and fun.”

1 Fiscal year 2018 GAAP EPS guidance excludes the impact of any additional charge on extinguishment of debt in fiscal 2018 expected to be associated with the debt tender offer announced on October 6, 2017, as well as the impact of other strategic decisions that could occur during fiscal year 2018.
2 See additional information at the end of this release regarding non-GAAP financial measure.
3 Assumes currency exchange rates remain at current levels.

Biggs commented, “We feel good about where we are as a company. Our plans are designed to win with both customers and shareholders as we operate within our financial framework. Our financial position is strong, which allows us to invest in the business while returning significant cash to shareholders.”

The company expects capital expenditures to be approximately $11 billion for fiscal years 2018 and 2019.

The company expects global unit growth of approximately 280, including new, expanded and relocated units, for each of the fiscal years 2018 and 2019.

1 Excludes the impact of acquisitions, if any.

Wal-Mart Stores, Inc. (NYSE: WMT) helps people around the world save money and live better – anytime and anywhere – in retail stores, online, and through their mobile devices. Each week, over 260 million customers and members visit our more than 11,600 stores under 59 banners in 28 countries and eCommerce websites in 11 countries. With fiscal year 2017 revenue of $485.9 billion, Walmart employs more than 2.3 million associates worldwide. Walmart continues to be a leader in sustainability, corporate philanthropy and employment opportunity. Additional information about Walmart can be found by visiting http://corporate.walmart.com, on Facebook at http://facebook.com/walmart and on Twitter at http://twitter.com/walmart.

This release contains certain forward-looking statements that are intended to enjoy the safe harbor protections of the Private Securities Litigation Reform Act of 1995, as amended, including statements regarding guidance, forecasts and expectations of Walmart’s management of or for:

Walmart's actual results may differ materially from the guidance, projections, estimates and expectations discussed in or implied by such forward-looking statements as a result of changes in circumstances, assumptions not being realized or other risks, uncertainties and factors, whether globally or in one or more of the markets in which we operate, including:

Regulatory and Other Factors

Such risks, uncertainties and factors also include the risks relating to our operations and financial performance discussed in Walmart's filings with the SEC, including in our Annual Report on Form 10-K for the fiscal year ended January 31, 2017, and Quarterly Report on Form 10-Q for our fiscal quarter ended July 31, 2017. You should read this release in conjunction with that annual report on Form 10-K and Walmart's subsequently filed quarterly reports on Form 10-Q and current reports on Form 8-K. You should consider all of the risks, uncertainties and other factors identified above and in those SEC reports carefully when evaluating the forward-looking statements in this release. Walmart cannot assure you that the future results reflected in or implied by any such forward-looking statement will be realized or, even if substantially realized, will have the forecasted or expected consequences and effects for or on Walmart's operations or financial performance. Such forward-looking statements are made as of the date of this release, and Walmart undertakes no obligation to update such statements to reflect subsequent events or circumstances.

Reconciliation of and Other Information Regarding a Non-GAAP Financial Measure

We have calculated Adjusted EPS Guidance for Fiscal 2018 by adjusting for the amount of the impact of: (1) the Q2 loss on the early extinguishment of certain debt and (2) the gain on the sale of Suburbia in Mexico.

Business
Walmart Announces COVID-19 Vaccination Policy for Campus Office Associates
As Dr. Cheryl Pegus and Donna Morris recently shared, we are taking additional steps to continue prioritizing the health and safety of our associates. As a follow-up to their note, I want to share some more information. As we all know, the pandemic is not over…

Business
Walmart Responds to CDC Guidance, Updating Mask Policy and Urging Vaccinations for Associates
As the COVID-19 pandemic continues, the health and well-being of our associates continues to be our top priority. This week, the Centers for Disease Control and Prevention (CDC) updated their guidance regarding wearing masks due to the concerning levels of transmission of the Delta variant…

Business
Walmart To Offer Technologies and Capabilities To Help Other Businesses Navigate Their Own Digital Transformation
BENTONVILLE, Ark., July 28, 2021 — Today Walmart announced it will begin offering several of its own technologies and capabilities to other businesses and brands seeking to better serve customers as they increasingly shop across digital and physical storefronts. As part of this effort, Walmart also announced a strategic partnership with Adobe to…