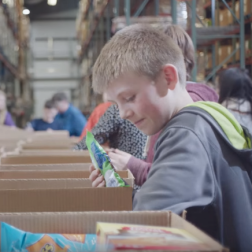 Walmart aims to donate up to $3 million to Feeding America based on the public’s participation in the “Fight Hunger. Spark Change.” campaign. Combining Walmart’s donation with supplier donations through product purchases and customer donations at the register, the campaign has a goal of helping Feeding America secure 75 million meals on behalf of its member food banks.

The ‘’Fight Hunger. Spark Change.’’ campaign launches at a critical time when one in seven Americans struggle with hunger according to the USDA. To raise awareness of the issue of hunger in America and help generate meals for those in need, Walmart and its suppliers are encouraging the public to take action online and in-store to support the Feeding America network of food banks and the more than 46 million Americans it serves throughout the country.

“This campaign is a great example of our long-standing commitment to hunger relief and dedication to ensuring every family has access to affordable, healthier and sustainably grown food,” said Kathleen McLaughlin, president of the Walmart Foundation and chief sustainability officer for Walmart. “Successful partnerships are the key to making a positive impact on the issue of hunger in the U.S. and we’re proud to once again work with Feeding America, the nation’s leading organization dedicated to fighting hunger. Together with Feeding America, our suppliers and customers, we’re working to generate the equivalent of 75 million meals that will make a real difference for families who are struggling with hunger.”

From March 28 to April 25, there are three easy ways to Fight Hunger and Spark Change:

1.     Purchase: Purchase participating products in Walmart stores to help provide meals for families who struggle with hunger in your local community. For every participating product purchased at Walmart between March 28 and April 25, 2016, the manufacturer will donate $0.09 to Feeding America - enough to secure one meal on behalf of local food banks - up to each manufacturer’s maximum donation, which is provided on the participating packages. See package or Walmart.com/fighthunger for details.

2.     Online Acts of Support:  Generate donations for Feeding America food banks by using #FightHunger on Twitter, Facebook and Instagram, sharing and liking campaign posts on Facebook, showing support on Walmart.com/fighthunger and using unique Snapchat filters in select stores. For the first time, Twitter has developed a custom emoji for the “Fight Hunger. Spark Change.” campaign. When you Tweet using the hashtag #FightHunger, the custom emoji will appear after the hashtag. For each online act of support, Walmart will donate enough to help Feeding America secure 10 meals (an equivalent of $0.90) on behalf of member food banks, up to $1.5 million.

To kickoff the campaign, Walmart will make an initial donation of $1.5 million to Feeding America, with the goal of reaching a total donation of $3 million based on the public’s social engagement.

3.     Donate at the Register: Donate to local Feeding America food banks at the register during checkout.

“Hunger affects people in every community across the country and, at Feeding America, we work hard every day to help people who may not know where they will find their next meal,” said Diana Aviv, CEO of Feeding America, the nation’s leading hunger-relief organization. “It takes many different groups coming together to strengthen our communities. We are grateful to Walmart and its dedicated suppliers for coming together to launch the ‘Fight Hunger. Spark Change.’ campaign, which provides a great opportunity for all of us to make a difference.”

With the USDA reporting that 48 million people in America, including more than 15 million children, struggle with hunger, the ‘’Fight Hunger. Spark Change.’’ campaign is part of Walmart’s larger commitment to provide meals to those in need, helping ensure every family has access to affordable, nutritious and sustainably grown food.

As the nation’s largest grocer, Walmart is in a unique leadership position to positively impact the issue of hunger in the United States. In October 2014, Walmart announced a commitment to create a more sustainable food system, with a focus on improving the affordability of food by lowering the “true cost” of food for both customers and the environment, increasing access to food, making healthier eating easier, and improving the safety and transparency of the food chain. This commitment includes a goal of providing four billion meals to those in need in the U.S. by 2020.

To learn more about the campaign, visit www.walmart.com/fighthunger.

Wal-Mart Stores, Inc. (NYSE: WMT) helps people around the world save money and live better – anytime and anywhere – in retail stores, online, and through their mobile devices. Each week, nearly 260 million customers and members visit our 11,535 stores under 72 banners in 28 countries and e-commerce websites in 11 countries. With fiscal year 2016 revenue of $482.1 billion, Walmart employs more than 2 million associates worldwide. Walmart continues to be a leader in sustainability, corporate philanthropy and employment opportunity. Additional information about Walmart can be found by visiting http://corporate.walmart.com on Facebook at http://facebook.com/walmart and on Twitter at http://twitter.com/walmart. Online merchandise sales are available at http://www.walmart.com and http://www.samsclub.com.

Community
Walmart, Sam’s Club and the Walmart Foundation Announce Winter Weather Response Efforts to Help Those Affected by Recent Storms
BENTONVILLE, Ark., Feb. 19, 2021 — With the catastrophic storms, power outages and water shortages affecting Texas, Tennessee, Louisiana and Mississippi, Walmart, Sam’s Club and the Walmart Foundation are committing up to $1 million in cash and in-kind product donations to help with response efforts. As part of the commitment, funds will support…

Community
The Walmart.org Center for Racial Equity Awards Over $14 Million in First Round of Grants
BENTONVILLE, Ark., Feb. 1, 2021 — Walmart and the Walmart Foundation pledged to contribute $100 million over five years through a Center for Racial Equity to help address racial disparities in the U.S. in June 2020. Today, Walmart announced that Walmart and the Walmart Foundation are distributing the first $14.3 million of that commitment in…