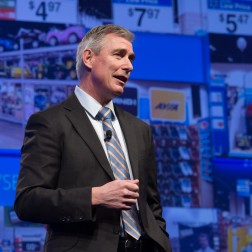 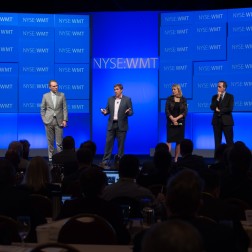 Watch the Webcast
Wal-Mart Stores, Inc. (NYSE: WMT) will webcast its 22 nd Annual Meeting for the Investment Community on Wed., Oct. 14 from approximately 9 a.m. to 12 p.m. CDT.  Discussions on strategy and financial projections will be accompanied by presentations from Walmart U.S. and Global eCommerce. Event materials, such as presentatio…
View Video 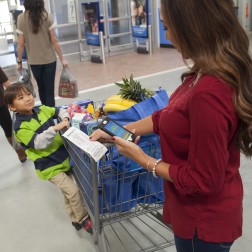 Why Walmart is Positioned to Win the Future of Retail

BENTONVILLE, Ark., Oct. 14, 2015 -- Wal-Mart Stores, Inc. (NYSE: WMT) today provided its strategic outlook and growth plans for the future at the company’s 22nd annual meeting for the investment community. The investments outlined today are part of a framework designed to drive sales growth by strengthening the U.S. and e-commerce businesses. This framework is intended to enhance the experience in stores, leverage Walmart’s unique supply chain capabilities to lower costs and build deep digital relationships with customers.

"These are exciting times in retail given the pace and magnitude of change. We have strengths and assets to build on and are making progress to position the company for the future,” said Doug McMillon president and CEO, Wal-Mart Stores, Inc.  "We’re encouraged by recent customer feedback and will continue to get stronger. Our investments in our people, our stores and our digital capabilities and e-commerce business are the right ones. We will be the first to build a seamless customer experience at scale to save our customers not only money but also time."

“Our sales growth over the next three years is estimated to range between 3 to 4 percent annually, which will add approximately $45 to $60 billion in sales. Within the last year, we have experienced traffic and comp sales improvements in our Walmart U.S. business, and our plan reflects that positive momentum continuing,” said Holley.

McMillon said Walmart is bringing a disciplined approach to managing the company’s financial resources and portfolio. “We are actively reviewing our portfolio to ensure our assets are aligned with our strategy.  But we will be thoughtful in our approach, recognizing our responsibility to drive shareholder value,” he said.

“Fiscal year 2017 will represent our heaviest investment period. Operating income is expected to be impacted by approximately $1.5 billion from the second phase of our previously announced investments in wages and training as well as our commitment to further developing a seamless customer experience,” said Holley.  “As a result of these investments, we expect earnings per share to decline between 6 and 12 percent in fiscal year 2017, however by fiscal year 2019 we would expect earnings per share to increase by approximately 5 to 10 percent compared to the prior year.”

The company also announced that its board of directors has authorized a new $20 billion share repurchase program and retired the $8.6 billion remaining on its 2013 authorization.

“We remain committed to our strong balance sheet and have said that we would only use it for strategic purposes. Last year and this current year, we have not utilized that capacity as we felt it was not the right time to drive a larger volume of share repurchase.  We expect over the next three years to generate around $80 billion in cash. Given the current landscape, we have a strategic opportunity, and our intent would be to utilize this new $20 billion authorization over the next two years,” said Holley.

“This share repurchase program, combined with our annual dividends, reinforces our continued commitment to delivering increased value to shareholders. We remain committed to maintaining a strong balance sheet and financial position that enables us to continue focusing on growth-oriented opportunities,” continued Holley.

Projected capital expenditures are as follows and exclude the impact of future acquisitions, if any:

The capital expenditures listed below provide the breakdown between the company’s physical, e-commerce and digital initiatives provided above.

Projected Walmart U.S. and Sam's Club U.S. units include new stores, expansions and relocations. Given the conversion of Walmart discount stores to supercenters, the total number of supercenter units will continue to increase, as the number of discount stores declines. Unit growth in the United States is projected as follows:

About Walmart
Wal-Mart Stores, Inc. (NYSE: WMT) helps people around the world save money and live better - anytime and anywhere - in retail stores, online, and through their mobile devices.  Each week, nearly 260 million customers and members visit our 11,532 stores under 72 banners in 28 countries and e-commerce websites in 11 countries.  With fiscal year 2015 revenue of $485.7 billion, Walmart employs approximately 2.2 million associates worldwide.  Walmart continues to be a leader in sustainability, corporate philanthropy and employment opportunity.  Additional information about Walmart can be found by visiting http://corporate.walmart.com on Facebook at http://facebook.com/walmart and on Twitter at http://twitter.com/walmart.

This release contains certain forward-looking statements that are intended to enjoy the safe harbor protections of the Private Securities Litigation Reform Act of 1995, as amended, including statements regarding forecasts and expectations of Walmart’s management of or for:

Walmart's actual results may differ materially from the guidance, projections, estimates and expectations discussed in or implied by such forward-looking statements as a result of changes in circumstances, assumptions not being realized or other risks, uncertainties and factors, whether globally or in one or more of the markets in which we operate, including:
Economic factors:

Regulatory and other factors: