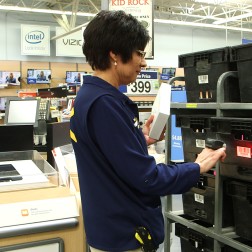 PLAINFIELD, Ind. (August 12, 2015) – A new Walmart e-commerce fulfillment center in Plainfield is now serving consumers in Indiana and throughout the U.S. Today, Indiana Governor Mike Pence joined company executives and community leaders at the 1.2 million square foot building to celebrate the progress being made there and more than 300 new jobs at the facility.

Walmart, which currently employs more than 36,000 associates in Indiana, built the new e-commerce fulfillment center to handle its rapidly growing online business. The massive building is dedicated to fulfilling e-commerce orders, and is able to house millions of items and ship them to customers or stores for free pickup. The Plainfield facility is the latest addition to Walmart’s next-generation fulfillment network that consists of additional e-commerce fulfillment centers, Walmart stores and distribution centers, and its world-class transportation fleet. The combination of all these fulfillment assets enables Walmart to get closer to customers and deliver online orders fast and at a lower cost.

“Since day one, our goal has been to create a business-friendly climate here in Indiana,” said Governor Pence. “With low taxes, low regulations and a highly-skilled workforce, it’s easy to see why companies like Walmart continue to choose the Hoosier State from a world of options in order to build and grow their operations.”

“Some of the most sophisticated technology we’re building comes to life in this building, and enables us to ship orders to customers quickly and cost-efficiently,” said Neil Ashe, chief executive officer, Walmart Global eCommerce. “As we add the Plainfield Fulfillment Center as the latest jewel in our next-generation fulfillment network, we’re happy to bring a little bit of Silicon Valley to Indiana.”

Officials from Hendricks County and the town of Plainfield also attended the ceremony where Walmart announced contributions to four local organizations. These contributions were made through Walmart’s continued efforts to fight hunger across the country. In Indiana, Walmart donated 21.4 million pounds of food to local food banks in 2014, which is the equivalent to nearly 18 million meals.

“Walmart understands the importance of investing in the communities we serve. We’re excited to be hiring more than 300 Hoosiers locally that will serve our customers across the country,” said Eric Tomaszewski, general manager of the Walmart facility. “Thanks to the leadership of the Hendricks County Economic Development Partnership, we look forward to a strong relationship with the Plainfield community for many years.”

Walmart’s e-commerce fulfillment center became operational in July and will add additional capacity in the coming months before the holiday season.

About Walmart
Wal-Mart Stores, Inc. (NYSE: WMT) helps people around the world save money and live better – anytime and anywhere – in retail stores, online, and through their mobile devices. Each week, we serve nearly 260 million customers who visit our 11,508 stores under 65 banners in 28 countries and e-commerce websites in 11 countries. With fiscal year 2015 revenue of $486 billion, Walmart employs more than 2 million associates worldwide. Walmart continues to be a leader in sustainability, corporate philanthropy and employment opportunity. Additional information about Walmart can be found by visiting http://corporate.walmart.com on Facebook at http://facebook.com/walmart and on Twitter at http://twitter.com/walmart. Online merchandise sales are available at http://www.walmart.com and http://www.samsclub.com.

eCommerce
Introducing Free Assembly: A Modern Fashion Brand for Women and Men, Found Only at Walmart
Walmart’s fashion portfolio has grown significantly over the past few years as we’ve focused on expanding our assortment. We’ve launched exclusive, elevated brands. We’ve added more than 1,000 apparel brands to our online assortment, and we have a new…

eCommerce
Get to Know Dwight Fenton, Our Brand Builder in the Making
Today, we’re thrilled to announce that Walmart is launching Free Assembly, a modern fashion brand that offers elevated style essentials for both men and women at an incredible value. The new brand will be available starting today on Walmart.com and in select…