Walmart Doubles Down On Video Gaming

Walmart Doubles Down On Video Gaming 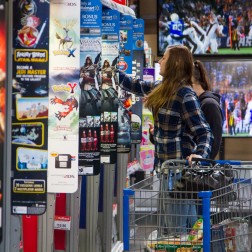 Blog: Trade in used video games for Walmart credit
There are almost a billion video games sitting unused in homes across the United States. Starting next week, those games can be traded for eGift cards at Walmart.
View Blog Post
Watch the Ad
View null 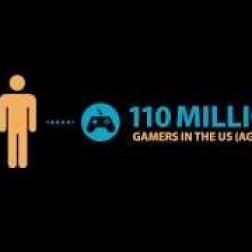 BENTONVILLE, Ark. – March 18, 2014 – Walmart is giving the more than 110 million gamers across the U.S. a new way to unlock value in their current purchases and save even more when it comes to one of the fastest-growing forms of entertainment.

Starting Wednesday, March 26, customers will be able to trade in their video games and apply the value immediately towards the purchase of anything sold at Walmart and Sam’s Club, both in stores and online. The traded-in games will then be sent to be refurbished and made available for purchase in like-new condition at a great low price.

“Gaming continues to be an important business for us and we’re actively taking aim at the $2 billion pre-owned video game opportunity,” said Duncan Mac Naughton, chief merchandising and marketing officer for Walmart U.S. “When we disrupt markets and compete, our customer wins. They’ll save money on video games and have the flexibility to spend it however they want.”

Available at more than 3,100 Walmart stores nationwide, the new trade-in service will accept thousands of games for popular consoles like the Sony PlayStation3 and Microsoft Xbox 360. Trade-in value will vary.

How to trade in used video games at Walmart

Later this year, Walmart customers will also be able to purchase pre-owned video games in stores and on Walmart.com. The video games will be labeled “Certified Pre-Owned” which means the product is fully refurbished and in like-new condition.

“While new releases will remain the focus of our gaming business, we’re glad to give our customers the option to buy pre-owned games,” added Mac Naughton.

Walmart’s in-store video game trade-in program builds on its existing trade-in offerings. In-store, customers can trade in tablets and smartphones and apply the trade-in value towards the purchase of a new device. Online at www.walmart.com/gadgetstogiftcards, customers can receive credit for a larger range of products such as MP3 players, cameras and laptops, in addition to smartphones, tablets and video games.

About Walmart
Wal-Mart Stores, Inc. (NYSE: WMT) helps people around the world save money and live better – anytime and anywhere – in retail stores, online, and through their mobile devices. Each week, more than 245 million customers and members visit our 10,955 stores under 69 banners in 27 countries and ecommerce websites in 10 countries. With fiscal year 2013 sales of approximately $466 billion, Walmart employs more than 2 million associates worldwide. Walmart continues to be a leader in sustainability, corporate philanthropy and employment opportunity. Additional information about Walmart can be found by visiting http://corporate.walmart.com on Facebook at http://facebook.com/walmart and on Twitter at http://twitter.com/walmart. Online merchandise sales are available at http://www.walmart.com and http://www.samsclub.com

Community
Walmart.org Center for Racial Equity Update: Advancing Equity in Criminal Justice
Being raised in Southwest Detroit in the 1990s, I could define the relationship between the community and the criminal justice system in one word: traumatic. Growing up, I saw that each father, brother, sister or mother who entered the criminal justice system…

Business
Walmart Statement in Response to Fake Litecoin Press Release
Walmart was the subject of a fake news release issued on Monday, Sept. 13, that falsely stated Walmart announced a partnership with Litecoin (LTC). Walmart had no knowledge of the press release issued by GlobeNewswire, and it is incorrect. Walmart has no relationship with Litecoin. GlobeNewswire issued a notice across its…