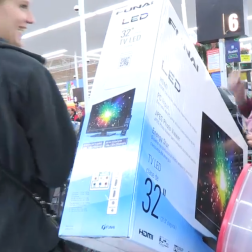 “We said Black Friday is the Super Bowl of retail, we ran a play that only Walmart could deliver and our customers loved it,” said Bill Simon, president and CEO of Walmart U.S. “Our Black Friday events were bigger, better, faster, cheaper and safer than ever. More customers chose us, we had the prices and products they were looking for, and we’re not finished yet. Helping families get ready for a great Christmas – and get a lot of great deals while they’re at it – is exactly what we’re going to continue to do.”

Walmart continued to set itself apart from its competition this holiday season. For the first time, customers were offered wristbands for popular products, allowing them to shop while they waited for deals. Customers also flocked to Black Friday savings that were only available at Walmart on the new Sony PS4, Microsoft Xbox One and other items. These offerings were in addition to the retailer’s expanded One-Hour Guarantee on hot electronics, toys, home goods and other items.
“Our success today and throughout the holiday season wouldn’t be possible without our dedicated associates. Every year, they exceed our expectations and this year, they really brought their A-game,” Simon continued. “It’s a lot of hard work, but our amazing team pulls it off every year.”

In appreciation for their hard work, Walmart will provide $70 million in holiday pay to hourly store associates. Walmart store associates who work on Thanksgiving Day will also receive a 25 percent discount on an entire purchase on Dec. 5 and Dec. 6, allowing associates to save millions of dollars on holiday gifts for their families. This is on top of the quarterly bonus full- and part-time store associate receive based on their stores’ third quarter performance.

“I think it’s great that Walmart is giving me a 25 percent discount on an entire purchase for working on Thanksgiving. I feel that my hard work is being recognized and rewarded,” said Ann Gilchrist, customer service manager in Escanaba, Mich. “Last year I saved $100 with the extra discount and I saw others save even more.”

Top Sellers Across The Country
From coast to coast, yesterday’s top sellers at Walmart – in stores and online – were big screen televisions, the iPad mini, laptops, XBOX ONE, PS4 and Call of Duty Ghosts. Customers also bought:

In addition, hand-held video games and SLR digital cameras were some of the most popular items on Walmart.com.

Ahead: A Weekend Full Of Savings In-Store and Online
The great deals aren’t over yet for Walmart customers. Starting at 8 a.m. Friday, Walmart customers can take advantage of deals across the store, including special pricing on the latest Apple iPhones, vehicle tires and the Keurig brewing system. Next up, customers can get “Manager’s Specials.” For the first time on Black Friday, Walmart store managers will drop prices on hot gifts in real-time from 8 a.m. to 2 p.m.

About Walmart
Wal-Mart Stores, Inc. (NYSE: WMT) helps people around the world save money and live better – anytime and anywhere – in retail stores, online, and through their mobile devices. Each week, more than 245 million customers and members visit our 11,096 stores under 69 banners in 27 countries and e-commerce websites in 10 countries. With fiscal year 2013 sales of approximately $466 billion, Walmart employs more than 2 million associates worldwide. Walmart continues to be a leader in sustainability, corporate philanthropy and employment opportunity. Additional information about Walmart can be found by visiting http://corporate.walmart.com on Facebook at http://facebook.com/walmart and on Twitter at http://twitter.com/walmart. Online merchandise sales are available at http://www.walmart.com and http://www.samsclub.com.

Opportunity
10-years Later, Army Veteran Shares Why Working at Walmart is the Perfect Fit for Service Members
Starting a new career can be daunting for anyone. And that goes double for U.S. military veterans cycling into civilian life. Earlier this year, Walmart fulfilled its commitment to hire 250,000 military veterans by 2020. I caught up with one of our proud military veterans, Jessica Huntsman, to…

Opportunity
Walmart Celebrates Veterans Welcome Home Commitment; Achieves Goal of 250,000 Veteran Associates Hired
BENTONVILLE, Ark., July 1, 2020 — When Jessica Huntsman returned to civilian life after almost a decade of service in the U.S. Army, she found it more challenging finding a job than she’d expected. “I put in so many applications when I left, but no one wanted to take a look,” she said. “I asked myself, ‘I check all of these boxes, why does no one…